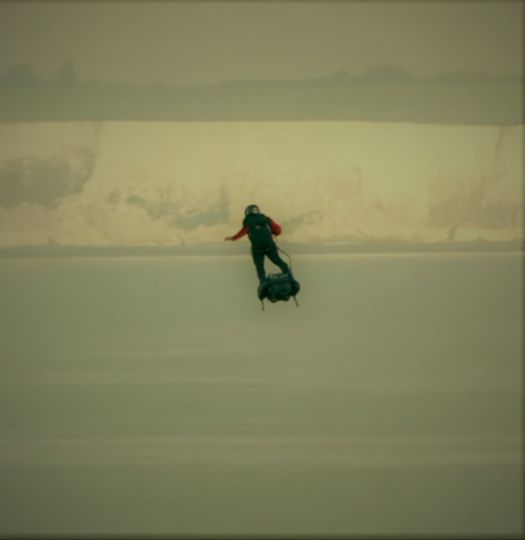 The Frenchman Franky Zapata developed the Flyboard Air on his own – a hoverboard with five small jet engines. Exactly one hundred years after Blériot’s pioneering flight, he made his way across the English Channel. But the first attempt failed because Zapata fell during a stopover to refuel into the water.

The inventor also participated in the military parade

But 12 days later, the French inventor flew from Sangatte to Margaret’s Bay on his flyboard. This time, the necessary refueling went smoothly, so that the standing pilot safely landed on the other side after about 22 minutes.

En route, Zapata reached speeds of up to 190 kilometers per hour with his board. The control was carried out via a joystick in the right hand of the pilot. A few weeks ago, the Flyboard Air was the focus of public interest. During the traditional French military parade on July 14, Zapata flew over the marching troops with an assault rifle and was also seen by President Macron.

So far, the product is not ready for mass production

The background: The French military is interested in the technology of Flyboard Air. That’s also why the inventor received $ 1.3 million in government grants last year. Among other things, a new engine will be developed. As impressive as the images of Zapata on his board look, so far there is still a problem: Except him, no one can control the unusual aircraft.

In this point, therefore, some development work may be necessary. However, the progress made in recent years is already impressive. Zapata set a new world record in 2016 by flying around two kilometers with his hoverboard. Meanwhile, the range is limited only by the fuel consumption.