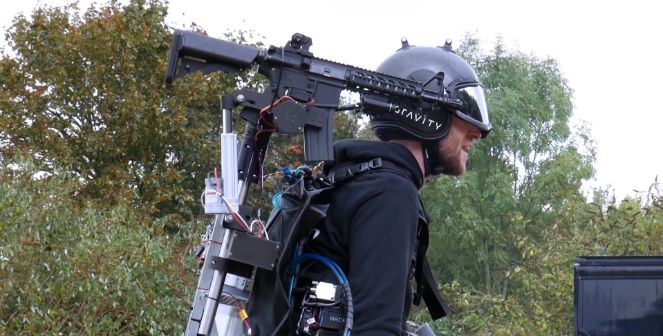 The flying jumpsuit designed by Gravity Industries attached a gun to the shoulder of his suit; The applications of the technology are not yet known, but this may be the future of wars.

In 2017, the Englishman Richard Browning presented to the world his version of the costume of the hero “Iron Man”. Since then, Gravity Industries, a Browning-founded company that continues to work in clothing, has made several improvements to perfect the invention.

Engineer James Bruton has now presented an exciting (and dangerous) update to the flying jumpsuit: an automatic rifle mounted over the shoulder of the person wearing the suit.

In a video released last Monday, Browning continues wearing the outfit he created, but with the addition of the weapon. It can be observed that the device moves to follow the helmet of the user, causing it to aim where the person is looking.

The video still shows the company founder wearing the costume and hovering over a parking lot while firing the rifle, which was loaded with Airsoft bullets.

The initial design of the suit allowed the rifle also to rotate left and right, but this function was discarded because it would continuously hit the pilot’s head.

It is not yet known what the applications of this technology will be or whether military agencies will be interested in it and hire the company to develop its invention as a battle suit.

UK Defense Secretary Gavin Williamson seemed quite enthusiastic about possible military uses for Gravity clothing before the company even added a rifle. We may be about to witness the future of wars.