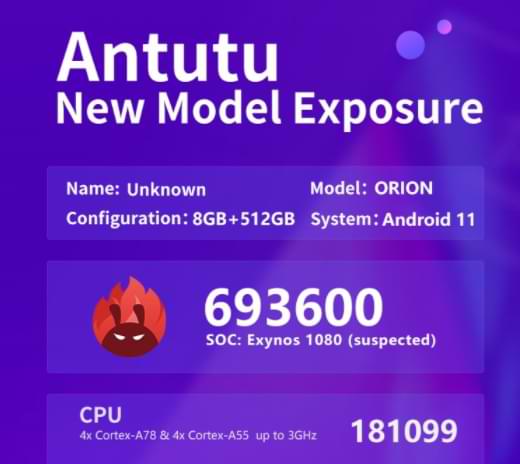 AnTuTu managed to showcase the first mobile phone using Exynos 1080 measuring 5nm. AnTuTu score results show that the cellphone uses the Cortex-A78 and four A55s which can be overclocked up to 3.0 GHz.

The Orion smartphone reportedly uses the Mali-G78, which is not known how many cores. But for GPU matters, the Exynos 1080 used in the Orion cellphone wins hands down over the Snapdragon 865+.

But we don’t know whether the Snapdragon 875 which is coming next year can really beat Exynos 1080 or not.

Oh yes, it is possible that the first cellphone to use the Exynos 1080 is the Vivo X60 which may have the Orion code.

Interestingly, the Exynos 1080 isn’t the tallest chipset Samsung has released. The highest chipset is Exynos 2100. Wow … What’s the speed like?