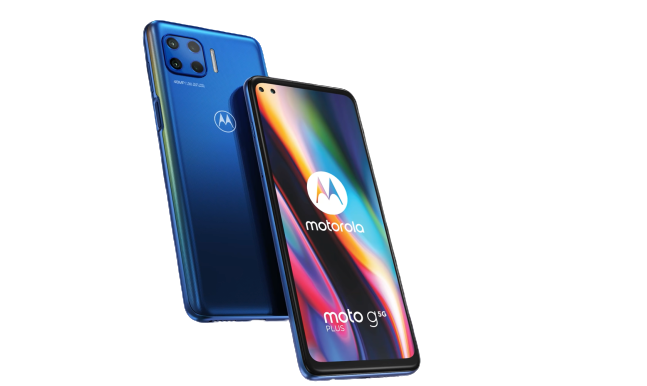 The Motorola firm is making a spectacular effort in recent months to offer one of the most nourished and generous mid ranges on the market.

The Moto G range is one of the most charismatic among mid-range phones, and now debuts its most exclusive member, the new Moto G 5G Plus, a phone that debuts the best features we’ve seen in this range, with connectivity.

Ultra-fast and no less than six cameras, all with a very innovative design within Motorola phones. A phone that will give a lot to talk about because of its excellent performance and price ratio.

Features of The New MOTO G 5G Plus

Without a doubt, the main feature of this new Moto G is that it has 5G connectivity, something almost essential for a new mobile since, in the next two years, it is expected that 5G will be something much closer and more common for everyone.

It will allow us to browse the Internet or download files up to ten times faster than now.

Something possible thanks to its Snapdragon 765G processor, the most powerful in Qualcomm’s mid-range, and which therefore places it a single rung below high-end phones in terms of performance. A phone that also has the best specifications in many aspects.

Like its screen, which has a large size of 6.7 inches and Full HD + resolution, it is also ultra panoramic thanks to the 21: 9 aspect ratio, worthy of the best movie theaters.

A screen that also has a 90Hz refresh rate, which offers an improved visual experience with which everything moves much more fluidly in front of our eyes, something that if you try, you will not want to stop using it.

It also has HDR10 + certification to enjoy higher contrast and color in your favorite content. This phone also stands out in the photographic section, since it has a total of six cameras.

Four behind with a 48-megapixel Quad Pixel primary sensor, which captures up to four times more light in the most challenging situations.

This is accompanied by a depth sensor to make better portraits and another macro sensor to take close photography. There is also a wide-angle with which to take spectacular panoramic photos.

Even in the front, it has a unique dual camera, with two holes on the screen separated between without, none of those pill-like designs that we have seen so far.

A camera with a primary 16-megapixel sensor and another wide-angle so that more people can take their selfies.

In addition to all this, a mobile phone does not give up a large battery at all, in this case, 5000mAh, which is also compatible with 20W Turbopower fast charging.

There is also NFC to make mobile payments, something recommended in the days of Covid-19, and we have all the Google apps and services on an almost pure Android 10.